On Thursday, November 7th, I traveled to Western North Carolina to visit with the men of the Jackson Rangers Camp # 1917, in Sylva, NC.  I enjoyed a nice meal, provided by the ladies of the OCR, and spoke to the members about the Virginia Flaggers and our heritage defense efforts.

I had a great visit, and was honored to be among these folks, who were most gracious and welcoming, and eager to discuss the issues that we, the sons and daughters of Confederate Veterans, face today.

I had the great pleasure of spending the following day site seeing around the area.  Downtown Sylva is charming, and after lunch with new friends, I  found the  Jackson County Confederate Monument and paid my respects.  From there, I rode over to Waynesville, to see the Confederate marker at the Haywood county Courthouse.  I had followed the situation there, where ONE lawyer had repeatedly removed Confederate Battle Flag Stick Flags placed there in honor and memory of the County's Confederate dead.  I planted a flag in their memory, and after inquiring inside, found out that the resolution proposed to ban ALL stick flags on the property (sound familiar?) had still not yet been voted on.

I had planned on driving up to the Blue Ridge Parkway and several of the Camp members had encouraged me to visit Confederate Forest.  I was intrigued and set out to find it.  Just as I was about to give up, I found it...and was not disappointed!   125,000 trees, one for every North Carolina soldier who served honorably in the Confederate Armed Services, were originally planted by the United Daughters of the Confederacy over a three-year period beginning in 1940  as a living memorial to North Carolina Confederate veterans. Stepping into the forest was awe-inspiring. What an amazing memorial!

The following day, I headed to Raleigh to meet a couple of Flaggers and attend the Re-Dedication of 4 NC Unit Battle Flags, restored as a project of the North Carolina SCV.

When I arrived in Raleigh, my first visit, I found myself on the Capitol grounds, unsure of exactly where the history museum was located.  Seeing the several Confederate monuments as I was driving by, I parked and grabbed a dozen stick flags and put them in my bag.  As I walked the across the grounds, I was approached by several people, including the man pictured below, who asked if they could buy one of the flags. Of course, I gave them a stick flag, courtesy of the Virginia Flaggers, and by the time I reached the history museum I had given away all but three of the flags!

The ceremony was absolutely fantastic!  Kudos to the NC Division SCV for their work in restoring and preserving these flags and for the wonderful service to rededicate them.  Michael Hardy gave a terrific lecture on the history of each unit and the flags, as each was unveiled to the awe and admiration of the audience that had gathered.

Afterwards, we went back to the Capitol Grounds, to join a solitary Flagger who we had found patrolling the grounds before the ceremony.  It turns out that he has been flagging the grounds for some time, protesting the removal of a Confederate Flag from the Capitol after the complaint of ONE person.

We had a GREAT afternoon, walking the grounds and talking with folks, ALL of whom were supportive.  It was quite a change from our experience on the Capitol grounds in Richmond, where no flag poles are allowed, and gatherings of more than two people, even to take a photo, require a permit. In Raleigh, we were almost giddy in the freedom to roam across the beautiful grounds and see all of the monuments and markers.

The folks in the first photo below were from Switzerland and Italy!

A wonderful, impromptu afternoon of flagging in the Tar Heel Capital!

Many, many thanks for the warm welcome and generous hospitality extended by all of the folks in North Carolina.  It was a memorable trip, filled with opportunities to meet and make many new friends, as well as visit with some old ones, share information, and pay respects at wonderful monuments and memorials to our Confederate dead.  :)

GOD BLESS THE MEN OF THE OLD NORTH STATE!

Sunday, December 8th: 3:00 p.m. - Mechanicsville Christmas Parade, Downtown Mechanicsville, VA - The Va Flaggers are participating in the parade and invite everyone to join us.  We will have Flaggers walking, riding, and the Mechanized Cavalry is joining us again this year!  Bring your flag and enjoy the afternoon in a VERY Confederate friendly environment.  :)

Saturday, February 1st, 2014:  Susan will travel to Statesboro, GA to speak at the Lee-Jackson Banquet, held by the Ogeechee Rifles, Camp #941, SCV.  RJ's Restaurant, 454 South Main St. (US 301 S.) @ 6 pm for the meal, preliminaries @ 7 pm and the program immediately following.  Seating limited to 125.  Ticket information forthcoming at a later date.

April 19, 2014, 2014:  Susan will be traveling to Quincy, FL to speak at the Confederate Memorial Day Service at the Soldier's Cemetery, sponsored by the Finley's Brigade, SCV. 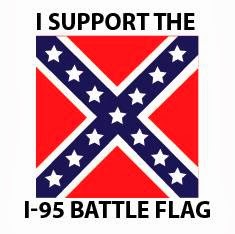 Contributions to the I-95 Battle Flag projects may be mailed to: