Text by Carlynn Trout with research assistance by Elizabeth Engel

Zerelda Cole James Samuel was the mother of the outlaw Jesse James. She was born Zerelda Elizabeth Cole on January 29, 1825, in Woodford County, Kentucky, to James and Sarah Cole. Her father was killed in a horse accident when she was two. In 1839 fourteen-year-old Zerelda entered a Catholic school for girls. She met Robert James, a college student, and they were married on December 20, 1841.
In 1842 Zerelda and Robert moved to Clay County, Missouri, to live with her mother and stepfather. After the birth of her first child, Zerelda moved to the farm where she would live the rest of her life. Zerelda bore four children with Robert James: Frank, Robert, Jr., who died shortly after birth, Jesse, and Susan.
After suffering the death of her husband Robert, Zerelda married Benjamin Simms briefly, then a doctor named Reuben Samuel in 1855. She had several children with Dr. Samuel.
Zerelda Cole James Samuel was a Confederate sympathizer who fiercely defended her son Jesse’s guerrilla activities. In 1875 she was maimed when Pinkerton agents threw a firebomb into her farmhouse in the hope of catching Jesse. After Jesse’s death, Zerelda had him buried on her property. She lived the rest of her life in the shadow of her son’s controversial legacy. She died on February 10, 1911.

Text by Carlynn Trout with research assistance by Elizabeth Engel

The following is a selected list of books, articles, and manuscripts about Zerelda Cole James Samuel in the research centers of The State Historical Society of Missouri. The Society’s call numbers follow the citations in brackets. All links will open in a new tab.

These links, which open in another window, will take you outside the Society's Web site. The Society is not responsible for the content of the following Web sites:
Posted by Unknown at 7:00 AM

In 2003, Southern Americans showed up in force to protest the removal of the flags at Higginsville and Pilot Knob Missouri.

Lets be clear: I stood by with compartiots.., & Neil Block..on March 2003 and  we where at that time the ONLY ones who did this.  We knew we could have went to jail that night.. 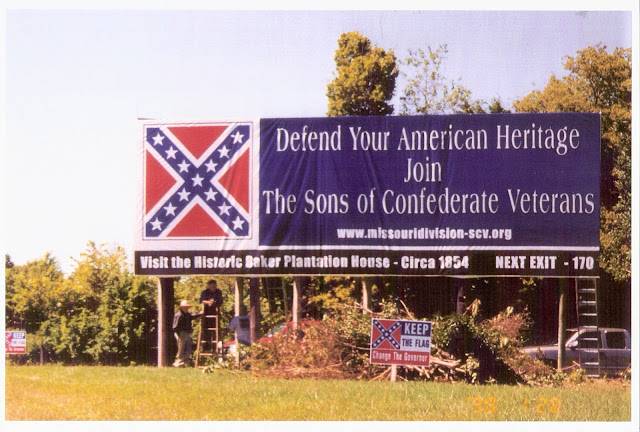 You guys might carry this conversation on the e-mail for a long time and maybe not but just to set the record straight I want you all to know I was a part of it and proud of IT.!  So proud in fact this picture/flag below is hanging on my wall to this day!  It is very dusty …and an important memory that means a very lot to me.. !!  what we done back then made a difference and as the old saying goes.. “The proof is in the pudding”
Gephardt is NO longer in the running for ‘nothing’!  IN fact he is a forgotten politician. 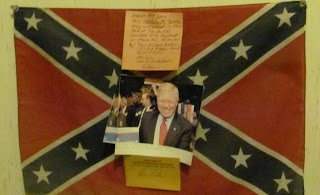 I’m very happy to be a part of putting this man down.  Some may not agree but that is your given right.  But you can see what happens when action is taken.  My name is Dan “Nohorses” Ballew and I done the fight when called with those compatriots who asked and I am tired now and getting old and can not do as much as I would want to do that needs done.  So I call on those who can to take up the Flag and do it again so we can get rid of those today like Gephardt.

My last thought is simple,  we done what we thought needed to be done then. And we made a ‘statement’ that got Press and the results speaks for it’self to this day…


Congressman Rangel: "Some Southern States Have Cultures That We Have To Overcome"

Compatriots:
I wanted every man in this organization to see the following clip. It is an interview with a prominent US Congressman. The remark you will want to pay close attention to comes at about the 0:55 mark.

It is always good to remember just what is at stake. This transcends mundane SCV business; this goes the essence of what our forefathers went to war over... and the essence of a cruel, vindictive Reconstruction. Regrettably, that period has never ended for some.

View the following. Be aware... this is why we speak up for our ancestors. In doing so, we are also defending the ability of future Southerners to be just that... Southerners... Americans... and not be ridiculed for it.
http://r20.rs6.net/tn.jsp?e=001zlycDD7RPdUrLuJdUQUxdoDvzgNm-g4CYAMq_sVHeI0dhqab7m_u60-26bs7iJxHIVZw9MKxZGgAoHjAGbvhuhDQslMv9wrmSwtQNLVSk9E2bRx1Uny2DKdL3jQm6CL0s2tomPA6BjsLdLyo9ecjbCNhyLu1wiD_aLor9sRNGOd9mlUSeYGBEg==

I guess the message of tolerance, recalled on a national holiday (and echoed in a Presidential inauguration address) fell on deaf ears with some. If you are offended by this, then tell YOUR Congressman about it; ask him to hold his uncivil colleague up to ridicule. Use the following link:

Cape Girardeau
Other Names: None
Location: Cape Girardeau City
Campaign: Marmaduke’s Second Expedition into Missouri (1863)
Date(s): April 26, 1863
Principal Commanders: Brig. Gen. John McNeil [US]; Brig. Gen. John S. Marmaduke [CS]
Forces Engaged: Garrison plus some reinforcements [US]; cavalry division [CS]
Estimated Casualties: 337 total (US 12; CS 325)
Description: Brig. Gen. John S. Marmaduke sought to strike Brig. Gen. John McNeil, with his combined force of about 2,000 men, at Bloomfield, Missouri. McNeil retreated and Marmaduke followed. Marmaduke received notification, on April 25, that McNeil was near Cape Girardeau. He sent troops to destroy or capture McNeil’s force, but then he learned that the Federals had placed themselves in the fortifications. Marmaduke ordered one of his brigades to make a demonstration to ascertain the Federals’ strength. Col. John S. Shelby’s brigade made the demonstration which escalated into an attack. Those Union forces not already in fortifications retreated into them. Realizing the Federals’ strength, Marmaduke withdrew his division to Jackson. After finding the force he had been chasing, Marmaduke was repulsed. Meant to relieve pressure on other Confederate troops and to disrupt Union operations, Marmaduke’s expedition did little to fulfill either objective.
Result(s): Union victory
CWSAC Reference #: MO020
Preservation Priority: IV.2 (Class D)
Posted by Unknown at 7:00 AM

You don’t have to be a Confederate or even a Confederate sympathizer to take the bit in your teeth and run with this action. Act now or endure the curses of your children for the rest of what will be a very miserable and potentially short life.

Being the current uproar over the 2nd amendment is all squawk  versus substance, we should look at the other provisions of the constitution to clear the air.

I am speaking of Article I, section 8 clauses 15 and 16.
Clause 15 & 16;
(15) To provide for calling forth the Militia to execute the Laws of the Union, suppress Insurrections and repel Invasions;
Note: The central government may only make provisions for calling forth the Militia. That means procuring the extra equipage required to maintain a force in the field i.e. tents, cots, rations and ammunition and prior determined spares to replace battle losses.

Second item of note is the requirement for the Militia to enforce the laws of the union. That can, and did, apply to the laws of the several states and locals when not in Federal service.

(16) To provide for organizing, arming, and disciplining, the Militia, and for governing such Part of them as may be employed in the Service of the United States, reserving to the States respectively, the Appointment of the Officers, and the Authority of training the Militia according to the discipline prescribed by Congress;

In clause 16, we find the Federal government only has 3 functions concerning the Militia, which is the whole people. Note that there is no age provision nor divisions of classes in the constitution. That means the government is responsible for arming the whole population with MILITARY GRADE WEAPONS suitable for an Infantryman of the Federal Army.

That means real ASSAULT weapons complete with high capacity magazines, select fire capabilities, bayonets and the proper ammunition to go along with them.

Gee, guess what, we haven’t even addressed the 2nd amendment yet!

Organizing, arming and disciplining are the natural realm of the Secretary of War and the War Department.

Organizing is nothing more than publishing a Table of Organization and Equipment (TOE) which prescribes the number of men within a unit and a breakdown of rank to command the unit. It also prescribes the basic issue of equipment to sustain the unit.

Now, on to the 2nd amendment! It wasn’t written to protect our rights per se yet we do have the God given right to protect our lives and the lives of our families and property and what better way to do so than with guns? It was drafted to prohibit congress for doing anything to alter the provisions of Article I, Section 8 clauses 15 and 16 which required the government to arm us! 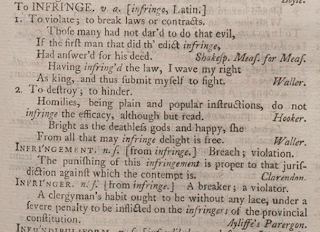 The weasel wordsmithing used by congress has attempted to amend the constitution by their legislative ‘law’! There isn’t a single ‘law’ concerning the Militia or guns that is valid and legally enforceable today but, by our own cowardice, we will continue to abide by their illegal acts until someone becomes so fed-up they start enforcing the constitution as it was meant to be.

The only way to get through to the Criminals in the District of Criminals is through extremely late term abortions. Our State and Local Officials are much closer and more easily approached so put a fire under them and force them to do their jobs for once in their miserable existence. Brook no partisanship on this issue.

If they won’t act in accordance with our wishes, recall them if you have that power. If you don’t have the right to recall, find out why not and really put pressure on the system to change it.

We are supposed to be a self-governing people. How can we exercise our authority over these cretins if we have no power to remove or punish them?

It’s high time to re-secure our liberties and that means action.

Dennis Joyce
"Our task of creating a Socialist America can only succeed when those who would resist us have been totally disarmed." -- Sarah Brady

"I don't care about crime; I just want to get the guns." -- Senator Howard Metzenbaum

"My view of guns is simple. I hate guns and I cannot imagine why anyone would want to own one. If I had my way, guns for sport would be registered, and all other guns would be banned." -- Deborah Prothrow-Stith (Dean of Harvard School of Public Health)

"If I could have banned them all - 'Mr. and Mrs. America turn in your guns' - I would have!" -- Diane Feinstein

This legislative package is a state-level response to constitutional violations of the 2nd Amendment by the federal government. Activists, we encourage you to send this to your state senators and representatives – and ask them to introduce this legislation in your state.

Scroll down to see local legislation that can be used in your county, city or town.

AN ACT, which shall be known and may be cited as the “2nd Amendment Preservation Act.”

To prevent federal infringement on the right to keep and bear arms; nullifying all federal acts in violation of the 2nd Amendment to the Constitution of the United States.

THE PEOPLE OF THE STATE OF (STATE) DO ENACT AS FOLLOWS:
SECTION 1 The legislature of the State of ____________ finds that:
A. The 2nd Amendment to the Constitution of the United States reads as follows, “A well-regulated militia, being necessary to the security of a free state, the right of the people to keep and bear arms, shall not be infringed.”
B. All federal acts, laws, orders, rules or regulations regarding firearms are a violation of the 2nd Amendment

SECTION 3 EFFECTIVE DATE
A. This act takes effect upon approval by the Governor.

AN Ordinance, which shall be known and may be cited as the “2nd Amendment Preservation Ordinance.” To prevent federal infringement on the right to keep and bear arms; nullifying all federal acts in violation of the 2nd Amendment to the Constitution of the United States.

Visit http://www.namebrandkidswearbydj.com/ the for best prices on kid’s clothing anywhere!

Visit http://www.namebrandkidswearbydj.com/ the for best prices on kid’s clothing anywhere!