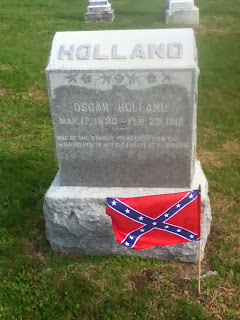 Thought you'd find significant interest in this – a fellow Missourian who refused to be reconstructed according to the "new order of things"....which we understand well today. Anyway, I came across the following article from the Platte County Historical Society on Oscar Holland (1830-1912). His grave at Camden Point Cemetery, which is pictured in the attached photo, states that he was "One of the sturdy pioneers from Va. who helped to settle the Plat Purchase" I also researched to see where his land may have been located in an 1877 Platte County atlas, and noted several tracts of land owned by the Holland family near Atchison Junction.
The article reads as follows:
He Died a Rebel – served throughout two wars but refused to be "reconstructed" after surrender. Transcribed from the Weston Chronicle of March 1, 1912.
Camden Point – Oscar Holland, who died in St. Joseph last Thursday night and who was buried here yesterday, was in reality a citizen of no country. For the past fifty years he had not voted, and he had never taken an oath of allegiance following the surrender of the Confederate armies, refusing to be "reconstructed."
Mr. Holland served through the Civil War in a Virginia regiment and went to Mexico following the surrender at Appomatox with Col. Jo Shelby to aid in securing Mexican independence and was one of the last survivors of the little band that saw Maximillian executed following France's desertion from the cause of the Austrian. After a residence in Mexico he returned to the United States, but, as stated, he never became a citizen under the new order of things. In addition to his service in the Confederate army he served in the Mexican war. When the Civil War broke out he took the vast retinue of Negro servants that belonged to his family and started to Texas and Mexico with them, but the emancipation proclamation and Union troops which he encountered freed the slaves.
In 1849 this remarkable man trekked across the plains to California with a wagon train from Farquar County, Va., his birthplace. He became fairly wealthy be prospecting for gold, and sewing his dust in a leather sack strapped it around his body and sailed around Cape Horn and back to New York. In 1854 he came to Platte County and bought the farm which he owned at the time of his death.