The sinking of the Sultana: A disaster lost in the lingering fog of the Civil War


The sinking of the Sultana: A disaster lost in the lingering fog of the Civil War 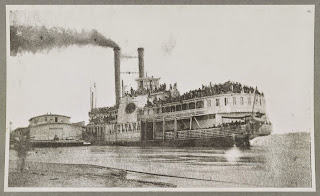 This April, to mark the 150th anniversary of the disaster, they will gather in Marion, Ark., just across the Mississippi River from Memphis. They will board a boat and travel upstream to where the Sultana sank and lay a wreath on the river to honor those lost. They will visit the spot where the wreckage of the steamboat now lies under a field on the Arkansas side of the river.
"We've done a lot to keep the story and to spread the story," said Norman Shaw of Knoxville, Tenn., who as founder of the Association of Sultana Descendants and Friends has been organizing gatherings since 1987. He expects 100 people or more to attend this year. "These fellows felt history forgot about them. . . . We're following the wishes of the original survivors to keep the story alive."
In the spring of 1865, the boys on the boat had wanted nothing more than to go home. Most never made it past Memphis. Today, many of them lie in the Memphis National Cemetery under simple white headstones engraved with the words "Unknown U.S. Soldier."
But not all of the graves are anonymous.
One marker is etched with the name of John Clark Ely, the Ohio soldier who never saw his next Christmas.