RICHMOND, Va. (WRIC) - Who defaced a statue of a Civil War general? A resident in the area reached out to 8News to find out who's behind the crime.

Sometime Monday morning, the statue of Civil War General J.E.B. Stuart was vandalized. Someone scrawled the words "F*** WORK" on the base of the statue, which is located at the intersection of Lombardy Avenue and Monument Avenue in Richmond.

8News contacted police about the crime; as of 2:15 p.m., we're still waiting to hear back.
"It's terrible," an 8News viewer wrote in a Facebook message to us. "Help us find out who did the defacing."

Copyright 2014 by Young Broadcasting of Richmond
Va Flaggers Call To Action! Please call Richmond Public Works starting at 7:30 a.m. Tuesday morning at (804) 646-7000, let them know you are disgusted by this act of desecration and ask them when the monument will be cleaned. If you have any information on who may have vandalized the statue, call Richmond Police at (804) 646-5100.

We will have Flaggers on the ground at the statue at 10:00 a.m. Tuesday morning.  Join us and help draw attention to this crime, expedite the clean up, and help publicize the incident to facilitate the arrest and conviction of those responsible. 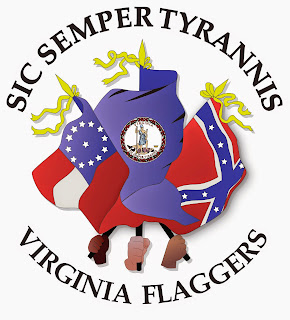